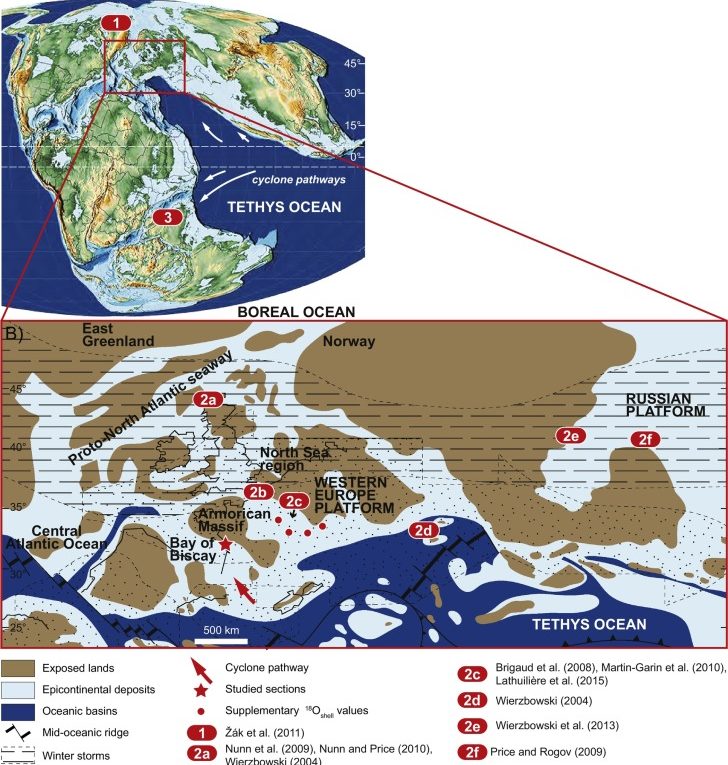 The relationship between palaeoclimate warming and cyclone frequency is still poorly understood, even though tempestites (i.e. storm deposits) may be abundant in Greenhouse period deposits. The Kimmeridgian marl-limestone alternations of the North Aquitaine Platform include abundant tempestites that formed in shallow to moderate-depth marine environments affected by westward-moving cyclones. High-resolution sedimentological and sequence stratigraphic interpretations, combined with biostratigraphy have allowed us to date these deposits. However, changes in cyclone frequency and temperature have never been determined and compared for this interval. In the present work, the relationship between temperature, cyclone frequency and their controlling factors are addressed for the first time. Oxygen isotope analyses were performed on brachiopod and oyster shells and on bulk rock samples from three sections close to La Rochelle, western France. To define a western European temperature tendency for the entire Kimmeridgian, these δ18Oshell values were supplemented by new oxygen isotope measurements from Kimmeridgian brachiopod shells of the Burgundy and Jura Platforms. These new δ18Oshell values were compared with a selection of published contemporaneous δ18Oshell values in order to specify the Kimmeridgian Greenhouse climatic conditions. The resulting overview shows that the average temperature of shallow seawater did not change through the Kimmeridgian while deep seawater warmed close to the early-late Kimmeridgian boundary (i.e. during the Cymodoce zone of the Sub-boreal realm or time equivalent zone). This global seawater thermal homogenization coincides with the most important increase in cyclone frequency recorded through the Kimmeridgian of western France. At the western European scale, a small decrease in temperature took place during the early Kimmeridgian, which is interpreted as a switch in oceanic circulation, on the basis of new mineralogical and elemental analyses performed on the Kimmeridgian of the North Aquitaine Platform. This switch in oceanic circulation may be due to widespread Kimmeridgian extensional tectonic activity, and to proto-North Atlantic seaway opening in particular. This kind of tectonically-induced regional divergence from the late Jurassic Greenhouse climate conditions probably diminished or even disappeared at the early-late Kimmeridgian boundary, favouring the global thermal homogenization of marine waters and the increasing frequency of cyclones observed in the present work.